Evolution of the Velocity Project, and the Transformation of Southeast Austin

Evolution of the Velocity Project, and the Transformation of Southeast Austin

Southeast Austin is getting more and more attention from real estate investors. Property owner and entrepreneur Barakat Ali, development company Presidium, and Elon Musk and Tesla have everything to do with it.

The attention is mostly thanks to the 7M sq. ft development, Velocity, that broke ground in 2021, will open in phases, and will be in the works for years to come – potentially even 10 more. This is one of the largest new developments in recent years, beating out Austin Green, which stands at 2.25 million square feet.

The area is south of SH 71, east of I-35, north of SH 45, and west of the Travis County line, reports the Austin Business Journal. Previously a rural community, home prices are rising, but until now, resources have lagged behind. Many residents report having to drive 15 miles or more on narrow, unlit roads to reach a grocery store, medical facility, or restaurant.

Historically, the area has been named a food desert due to the lack of easy access to fresh food. The community consistently has been calling for an HEB, and it’s reported that the company has purchased a 17.2-acre tract with plans for a store at an unspecified future date.

This project will not only transform the quality of life for residents by providing grocery stores, jobs, and more, but it will also highly increase the value of the region. If you invest in real estate in the area, your ROI turnaround could just be 7 years. 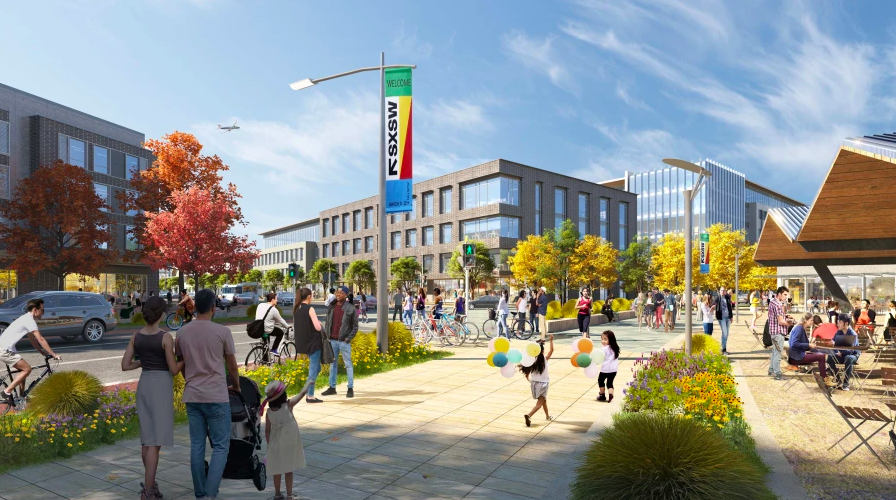 The value of what Velocity will bring is in the numbers: 3,000 multifamily housing units, 3.3M sq. ft office space, 250,000 sq. ft commercial use for shopping (including grocery), dining, and a cinema, as well as two large parks within 100+ acres of open land and park space, all according to their website.

Velocity will join some of the metro’s fastest-growing neighborhoods, including Goodnight Ranch and Easton Park in this region. Both of these developments have over 1600 reported housing units started or built. Both communities bring food trucks to combat the food desert, and Goodnight Ranch hosts a farmer’s market. Still, residents say their most pressing needs include more doctors and restaurants.

According to data in the Austin Business Journal, Southeast Austin had 1,406 new home starts in the first quarter, up 6% from the  same period in 2021 and a 34% jump compared with Q1 2020, according to data from Zonda. The addition of Velocity is set to make its growth exponential.

Velocity has had its own journey to the great place it’s in today. The land was purchased by entrepreneur Barakat Ali for $14,000 an acre in 2017. In 2018, a portion was sold to the French cosmetics company Chanel-Capsum, then in 2020, developer Presidium was brought on to develop Velocity.

Initial plans for Velocity were smaller and more industrious, however, Architecture and planning firm Sasaki redesigned the project’s remaining 314 acres into a massive mixed-use project that boasts much more green space, residential housing, job opportunities and access to fresh food.

In an interview with Commercial Search, Mark Bulmash, President of Mixed-Use/Master Plan Development, Presidium, stated that, “the site is also in a federally designated Opportunity Zone, the City of Austin’s Desired Development Zone and also a Triple Freeport Zone, which exempts businesses from paying taxes on inventory that leaves the state within 175 days.

This trifecta of factors makes it one of the most compelling sites for a major business to locate.” Velocity has space available for a major company to open a campus on their property, and are in talks with a few, according to Bulmash.

On the note of businesses relocating to Southeast Austin, attention started growing on the area when news of Tesla Inc. ‘s billion-dollar electric vehicle plant off the State Highway 130 toll road, which is now designated the company’s headquarters broke. Barakat Ali even stated that the property next to his land sold for $107,000 an acre, which was more than triple what he purchased the land for.

When asked if this area is perfect for Velocity, Bulshmash said, “The ripple effect of Tesla simply can’t be understated. We see many more projects taking flight, supported by a strengthening manufacturing industry that’s poised to grow tremendously in the coming years.”

The future vision for Southeast Austin is vivid. It’s poised for massive growth for the next 20 years, according to the Austin Business Journal, as the population is projected to grow from 2.2M to 3.6M. Many homes will be built here to match the growing population. The main goal for both the community and the developers involved are quality of life and sustainability for the expected influx of residents.

Velocity will provide food solutions, and there are plenty more in the works on top of that. Ali plans on opening both a 23,000 sq. ft market this summer as well as a 40,000 sq. ft  “supermercado”. Additionally, the H-E-B is still due to open a store on their 17.2 acre plot.

As reported by the Austin Business Journal, Capital Metropolitan Transportation Authority’s Project Connect will bring a train line to Austin-Bergstrom, linking Southeast Austin to an expanded transit system. Within the next 10 years, Southeast Austin will be a thriving, walkable, community that employs, feeds, and entertains many families in the metro.

If you’re looking for an investment with a bright future, schedule a consultation to discuss what investing in this area could look like for you.