The Austin job market has received many well-deserved accolades recently, including the best-performing job market among the 50+ metro areas with at least one million residents in the Wall Street Journal. 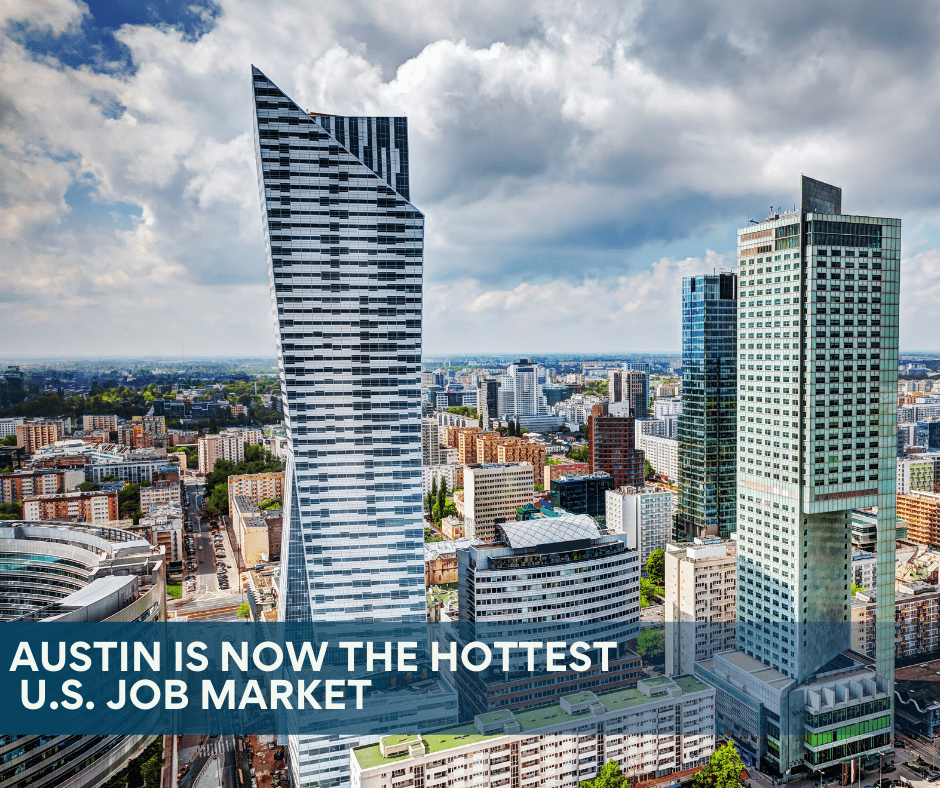 What is leading to Austin’s growing economy? According to Barvin, a Texas-based property and investment management firm, more than 100 tech companies have relocated to Austin, creating an additional 5,000 jobs in the area and many notable tech companies over the last two years. Recent tech companies that have or announced relocation or expansion to Austin include Snap, Tik Tok, Facebook, Amazon, and Tesla. Over 500 new jobs were created from moves like this alone in May 2022. When major companies move, the jobs created are in the thousands. When Tesla expanded their operation to Austin, it created 10,000 jobs in total.

Austin’s unemployment rate is 2.5%, down from 3.2% in November 2021. Since April 2022, the city has had its lowest pandemic-era unemployment rate. Between February and March of this year, the Texas Workforce Commission reported the metro had gained 7,000 jobs. 95,600 jobs total were added to the local market from March 2021 to March 2022.

Wages are also rising fast in Austin, as a recent legislation was proposed to raise the minimum wage to $22 for city employees. According to KXAN, the take-home pay in Austin is notably bigger, and it has risen twice as high as the national average on a percentage basis.

Austin’s booming job market means great things for the housing market. As more people move to Austin for the new jobs created, the need for new housing increases. According to a report on KVUE news, the current Austin real estate market is prime for real estate developers. Not only is the market prime for builders and developers right now, but the rental market is hot as well. At the end of last year, the Austin American-Statesman projected the housing market to continue to boom in Austin.

Although a housing market bubble burst is expected in many areas across the country, the momentum that Austin has may keep that from happening here. According to Texas A&M research economist Adam Perdue in The Real Deal, the rise in inventory and active listings signal that the market might be starting to “normalize,” if anything. Home prices are projected to slightly fall lower than the long-term upward trend of the last two years.